God Conversations: The Story Behind the Book 13 Jul God Conversations: The Story Behind the Book

I was 21 years old, had been in church all my life and read the Bible from cover to cover, but had never heard God speak. I knew a lot about God – the things that my parents and pastor had taught me – but I knew him in the same way you’d know the Queen of England through the pages of a magazine. I didn’t know him for myself.

Then at university I met a friend. Jill talked about God like he was her next-door neighbour. “God said this,” “God said that.” At first I was intrigued. Then I got annoyed. Why was Jill always hearing from God and I wasn’t? And more than that, why did people like Abraham, Isaiah, Paul and Phillip and all the others in the Bible hear God’s voice while I couldn’t?

I longed to know what it would be like to have a personal conversation with the Creator of the Universe. If God could speak to me, what would he say? What would the one who knew all my past and all the possibilities of my future speak to me about?

Then again, if God did speak, what if he called me to the wilds of the outback, or worse still, ask me to marry someone ugly? And what if I got it wrong?

In the end, my fears and doubts were outweighed by the possibilities. So at the crossroads of my student and working life, I prayed a terrifying prayer; “Lord, speak to me. And if you make it really clear, I’ll do whatever you say.”

When we look at biblical history, we see that God is a talker. In the Old Testament alone, the phrase “God said” is used over 3800 times. From beginning to end we see him talking: he’s chatting with Adam and Eve in the Garden, dialoging with Moses on a smoking mountain, arguing with Jeremiah in a pit and outlining plans for a city with Zechariah. This God talks and talks and talks. He makes fun of other gods who don’t talk. The God of the Bible is known for words that never fail, never lie and never fail to achieve what they’re sent for. Indeed it seems that nothing happened without him first speaking it (Amos 3:7).

Back in the ancient times, God’s messages came through the prophets – those who were specially chosen to be his spokespersons. When you needed to hear God speak, they were your first port of call. The problem was his voice could only be heard secondhand – you had to rely on someone else to get the message out. Even the prophets knew this wasn’t ideal and looked forward to a time when everyone could hear the voice of God for themselves (Jer. 31:34).

Everything changed when Jesus came. While the prophets spoke the words of God, Jesus came as ‘The Word of God’. Jesus showed us what it was like to have a two-way conversation with God (John 5:19). He modelled a relationship with God that was personal and intimate, describing it as a friendship that was defined by the things he would share with us (John 15:15).

A new season began when Jesus left the earth and sent us his Holy Spirit. Now we could all hear God’s voice in the same way that the Old Testament prophets did (Acts 2:16,17). His Spirit would not only remind us of the truths that had already been taught (John 14:26), but would tell us things to come (John 16:13). He would speak to us about our lives. Now we could all know him for themselves.

My Own God Conversations

After that radical prayer at 21, God began to speak. At first it was in the smaller things, then as I learnt to recognise him, in the larger things. He spoke to me about my future; about career he was calling me to, the houses I would live in and even the people I would meet. I saw the tangible hand of God intervening in my circumstances in ways that left me shuddering in awe.

But it wasn’t just about the more dramatic experiences. There was also the profound moments of other-worldly wisdom, the gentle rebukes that asked me to defy myself and the outlandish calls that took me far out of my comfort zone. The voice that said give my money away when I wanted to grip tightly onto it, the voice that said be kind to my nasty colleague when I wanted to fester in my bitterness and the voice that called me to start a new church in an situation that was impossible. Yet it was by hearing and responding to that voice that transformed me into a version of myself that is fuller and freer than I could ever have imagined. Firsthand I saw God’s kindness, his goodness and even his humour. God became personal. He was the friend Jesus described him to be.

Why then do we struggle to hear God’s voice? If God is a talker and longs for a two-way conversation with us, why can this area be so problematic? It’s a question I asked many times on my own journey and now as I hear it repeated all over the world. 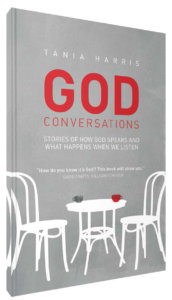 The problem is not with God. Time and time again I saw the lengths God would go to to make his messages clear. The time my flatmate and I had the same dream, the time the preacher mimicked my devotions, the time when a prophecy echoed his message his word for word. As Jesus promised, we can all recognise his voice – and know it enough to follow it (John 10:27).

The problem is with us. We are the ones who create the smokescreens and filters that distort God’s messages. It’s our mindsets, our agendas and particularly our desires that can so easily get in the way. The solution of course, is simple. Jesus said he reveals himself to those who respond to his voice (John 14:21). Each one of us is all called to offer that same prayer I prayed at 21. It’s risky. It frightening. But if we pray it from the heart, we will never be the same.