Posted at 13:40h in Podcast by Tania Harris 0 Comments
0 Likes

“My Mum was clinically dead for 8 minutes. She saw a beautiful light and moved towards it, but then she heard a voice say, ‘you don’t have access here.'”

“An inmate who was deaf in one ear prayed for his friend who was blind in one eye and they were both healed.”

How is God real for us? Stories like these reveal the reality of God and his heart for people. But how does this work for us? I can still remember how at 21, I sat on a beach in New Zealand reflecting on my life up until that point. I believed in God, Jesus and the Bible, but God wasn’t real to me – I couldn’t put my finger on a single incident where I’d experienced God’s reality in a tangible way. Thankfully, since then I’ve witnessed God in action and it’s changed my life. But I’ve also watched as others have lost their faith, particularly as they’ve moved from childhood into adulthood. How do we help people experience the reality of God? 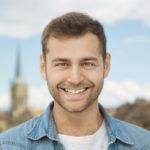 In this episode we’re talking with a man who’s made it his life mission to make God real for people. Pastor Andrea di Meglio is a local church pastor, itinerant speaker and film-maker who oversees several ministries focussing on the supernatural in his hometown in Bern, Switzerland and beyond. Andrea and his team have made two life-changing documentaries about the reality of God. The first, Christ in You, depicts ordinary people experiencing signs and wonders and healing on the streets. The second, The Voice, looks at how to hear God’s voice for others, including those who don’t know God. Both films are full of inspiring stories and interviews with world leaders like Bill Johnson, Heidi Baker and Randy Clark.

Andrea also shares the story behind the movies and their unlikely beginnings in a Filipino prison. His own journey began as a child being raised in a home where unusual and frightening spiritual happenings were part of the norm. He tells the story of his Mum, who began her spiritual search after a near death experience and dabbled in witchcraft and New Age practises before she found the source of light in Jesus. Andrea also shares how to experience God’s reality in your own life and in the lives of others. You’ll be encouraged to seek after the God who continues to show himself powerfully to those who seek him!

You can find out more about Andrea’s ministry at https://andreadimeglio.com.

The Film: Christ In You – The Voice

The voice of God changes everything! This documentary features a captivating exploration of the power of prophecy. It shows ordinary Christians, who set an example by partnering with the Holy Spirit and releasing God’s perspective wherever they go. Amazing interviews with Bill Johnson, Kris Vallotton, Lisa Bevere, John Bevere, Graham Cooke, Bob Hazlett, Raniero Cantalamessa and more provide wisdom in navigating towards a prophetic lifestyle.

Check the films out here: https://www.christinyoumovie.com

Andrea di Meglio is an author, filmmaker, leader and itinerant revivalist. He is on pastoral staff within his local church, the Vineyard Bern, where he has served since August 2012 and leads, coordinates and oversees several ministries related to the supernatural. He is passionate about equipping the Body of Christ to live supernaturally.