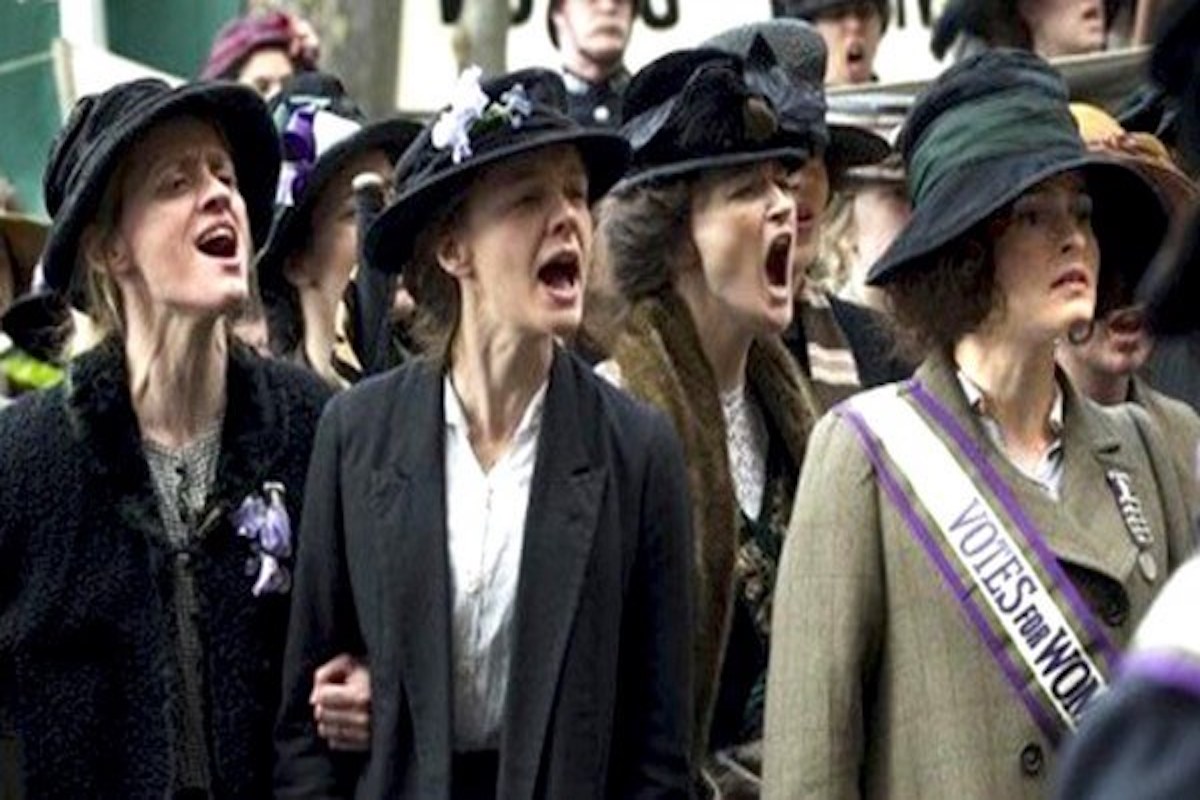 19 Jan Why You Need to Take your Husband, Boyfriend or Male Friend to See Suffragette

It was Boxing Day, and we were still light and giggly from the Christmas day dinner when my Mum, my flatmate and I headed to the movies. The plan was to see Suffragette, just released at the box office that day. My hope was that it would provide some good chick-flick entertainment, as well as fill in a few of history gaps and give some clarity on what the word ‘suffrage’ actually meant. As it turns out, the beautifully acted movie gave me a lot more than I expected. Suffragette turned out to be one of the most intense movies I’ve ever seen. You can watch the trailer here:

I grew up with a caricature of the raging feminist. We believed those bra-burning types with their crew cuts and placard-waving antics blatantly denied their God-given femininity and were out to destroy the social order.

After seeing the movie I realised in some ways the caricature of my youth was right. While the first wave feminists started their campaigns with peaceful marches and acts of civil disobedience, they soon began using militaristic tactics to gain attention. In much the same way that Martin Luther King and Nelson Mandela resorted to more aggressive methods when they weren’t given a hearing, the feminists caused a stream of destruction and disorder, burning down houses, cutting down telegraph wires and planting bombs in postboxes. While such tactics would not have been my chosen methodology, the movie helped me to understand why they did it. For their first time I began to fully realise their anger and their pain. What this movie did was give context to those raging feminists I used to criticise so dismissively.

It was a different world back in the England of the early 1900s. When those feminists took to the streets, they were not asking for the privilege of longer maternity leave or even something sensible as equal pay. This was not some frivolous rallying against the men who insisted on opening the door for them. This was the right not to be raped at their workplaces, the right to have a voice in the raising of a family and the right to be treated with respect and esteem. The denial of suffrage (the right to vote as I learned), was not about a token gesture on polling day, but it represented a deeply entrenched system that believed women didn’t have value in themselves and that their thoughts were only a mere reflection of the husbands, employers and leaders they served.

There is one particularly shocking scene in the movie that highlights the plight of women back then and acts as a defining moment for the main character, Maud Watts (played by Carey Mulligan). The 24-year-old laundress has been thrown out of the house by her husband for her feminist leanings. In hopes of seeing her young son, Maud steels home to find her husband handing him over for adoption. The scene is heartbreaking as Maud very quickly realizes that she is powerless to stop the exchange and so embraces her beloved boy for the last time.

Today we often deride the feminist movement for its aggression and bitterness. If only they weren’t so pushy, we say. If only they weren’t so angry. Such feelings were even formalised in a movement just last year that claimed feminism was unnecessary and that it celebrated aggression towards men. But was the anger of the suffragettes misplaced? Jesus himself became angry at injustice (Matthew 21:12-13) and the Old Testament tells the fury of God when the powerless are abused (Isaiah 10:1-2). Scenes such as those experienced by Maud and her son show us that anger can be warranted and that when it propels us to righteous action, it is the proper response to injustice and even reflects the heart of God.

That’s why you need to see the movie. Watching those women being demeaned and abused and feeling the pain of their real-life stories— helps us understand the reasons for the feminist movement and the motivations behind it. We will find ourselves profoundly thankful for the courageous actions of the suffragettes as without them, we couldn’t go to university, make choices about our careers or even travel without our husbands today.

But it’s not good if just the women go to see the movie. Our boyfriends, husbands and male friends need to see it too. For this is not just a women’s story for another time. It’s a human story that’s relevant for our world today. It provides understanding for our past, but it also propels us into action for our future.

For while the feminist struggle in the West today looks like full salaries, equal representation on boards and allowing women in the pulpit, the Majority world is still fighting the same battles faced by those 20th century suffragettes. In countries all over the world, countless women are being sex-trafficked, child brides are sold and raped, baby girls are aborted for their gender and domestic violence is the norm. They are tragic, brutal situations that demand our attention, stir up our empathy – and even provoke us to anger.

While our strategy may be different from those early suffragettes, God’s heart is still the same. His plan has always been to see men and women flourishing as his image bearers and he needs all of us working together to achieve it. Seeing the movie will help both men and women to be grateful for the progress that has been made, but it will also remind us that we still have a way to go.

Seen the movie yet? What did you think? Share your thoughts here: