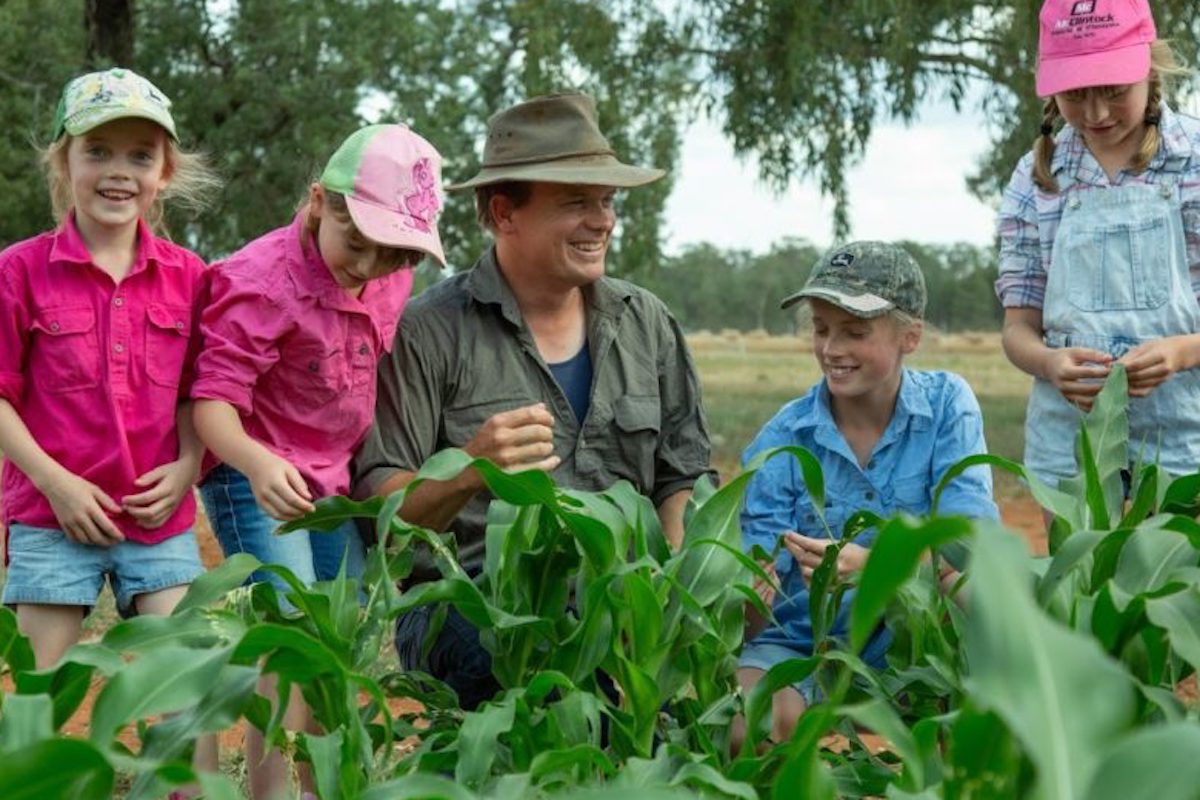 21 Aug The God-Dream that Saved a Drought Stricken Farm

Jarrod was an Australian farmer facing the worst drought of his life. For months he had done everything to steward his resources and use best practises to manage the farm that is home to his wife and their six children. The fight to stave off depression was a daily one. Farmers across the nation have resorted to suicide as their farms dry out, cattle die of starvation and hope withers with every sunrise. Like many, Jarrod was nearing the end of his ability to cope.

Then Jarrod had a dream. In the dream, he saw the paddock in the northeast corner of his farm. To his surprise, it contained a leafy crop of canola plants, each rising to a height of around 15-20cm. He knew that the canola had been sown in dry soil, but for some reason the plants were flourishing. He woke up thinking, Wouldn’t it be good if it was real?

The next day Jarrod shared his dream with his wife Emma. Could it be from God? They knew canola was a high-risk crop. It would cost over A$35,000 to buy the seed and there was still no sign of rain. Jarrod turned to his trusted agronomist for advice. His recommendation was clear – no, he should not plant canola – the risks were far too high.

And yet it seemed like the dream had come from God.

Jarrod and Emma made a decision. Defying their agronomist’s recommendation, they purchased 1100 kg of seed and began planting in the northeast paddock. It took them nearly 3 days, sowing through the nights to cover as much of the 1000 acres as they could.

The paddock was 80% sown when the rain came. Jarrod and Emma marvelled as the seed took root and grew. Over the next few weeks, the crop rose to 15-20cm in height. Their canola field soon became the talk of the district. It was their best crop of the year, producing 80% of their annual income. That income was the difference between bankruptcy and keeping the farm.

It’s a simple story, but a profound one. Hearing God’s voice saved Jarrod’s farm. Obeying the Spirit led to a miracle and enabled Jarrod to worship the God who is greater than the Australian drought. Yet the pattern of hearing, obeying and witnessing the miracle-working power of God is not unusual in biblical terms. The whole of Scripture is a record of this same process. Time after time, God speaks, people do what he says and miracles unfold.

The Most Powerful Experience on Earth

For instance, isn’t the act of creation the most powerful? Yet it began with God speaking (Gen 1:1). Isn’t healing more powerful? Yet it is the word “sent forth” that overcomes disease and death (Psalm 107:20, Mark 9:25, John 11:43). Isn’t salvation the most powerful of all? Yet it was performed by the living word, Jesus who became flesh (John 1:1). This is the repeated pattern throughout the Scriptures. God does nothing without first speaking it (Amos 3:7). Jesus did nothing without first hearing it (John 5:19). Every act of God is preceded by the act of speaking.

It is the words themselves that carry the power. God’s words are the instrument of his authority and the expression of his intent. God’s power to align an outpouring of rain with the canola at Jarrod’s farm was contained in his voice. Words from God transmit creative force and have the potential to bring themselves to pass (Gen 1:3). They are described by the prophet Jeremiah as a “fire and a hammer that breaks rock into pieces” (Jeremiah 23:29). Once sent, they are diligently watched over so that they perform the task for which they were purposed (Jer. 1:12). They transcend time, overrule circumstances and overtake the generations (Zech 1:6). Their purpose will always be fulfilled (Isaiah 55:11) for to fail is to defy the nature of the One who spoke them (Num 23:19, Isaiah 45:23).

An Invitation to the Heavenly Board Room

The power of God’s communiqués not only lies in their metaphysical ability to perform miracles. What makes hearing from God more potent is the disclosure of divine information. As God said to Jeremiah, “Call to me and I will answer you and tell you great and unsearchable things you do not know” (Jeremiah 33:3). The prophetic experience takes us into the board room of the heavenly council where God’s plans are divulged (Jeremiah 23:18). Hearing God’s voice gives us insight into what is going on behind the scenes of the natural world! It opens the door to the spiritual realm and the revelation knowledge of God.

Thus, Daniel saw why his prayer was delayed when the angel appeared (Daniel 10:3). Samuel saw who should be the king of Israel and was able to appoint him (1 Sam 16:12). Joshua the High Priest saw the reason for the attack on the Second Temple and the strategy for getting it going again (Zechariah 3,4). Paul saw the reason for the pain he was facing and how to respond to it (2 Cor 12:7-10). John saw the key to warring against the Roman empire and was able to tell the seven churches how to respond to persecution (Rev 5:6-8). And Jarrod saw what seed to plant and when it should be timed for the coming rains.

This divine revelation is necessary for God’s purposes to be enacted on earth. But God doesn’t do it alone. Instead, he chooses to involve his creation in his plan. Hearing God’s words then becomes the means by which we partner with him to bring his plans to earth. They are an invitation to work directly with him. As an invisible deity, God’s words are his outreached arm and the touch of his presence. They are the link from the spiritual to the natural realm and from the non-physical to the material world. When we hear and respond to them, it empowers us to do the will of God. As we co-operate, we experience his presence firsthand. Like a rocket bursting through the earth’s stratosphere, intangible truths break into tangible realities. Not only do we witness God’s miracle power, but we get get to know that the Creator of heaven and earth is real (Isaiah 45:21). We know that God is truly among us (1 Cor 14:25).

The beauty of all this of course, is that each one of us was given the capacity to experience God’s words in our lives (Acts 2:17). God wants to speak into every person’s situation so that he can partner with them to bring his presence and purpose. This is why hearing from God is so important. It will create miracles. It will give you wisdom. It will save you from impossible situations, and most importantly, it is the key to knowing God (John 10:27, John 17:3).